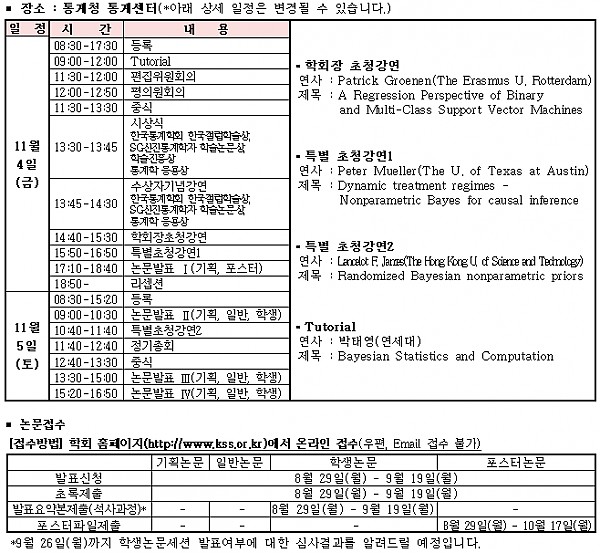 ※초청 강연 연사 소개
∙Peter Mueller교수(특별초청강연1)
Peter Mueller is Professor of Statistics, The University of Texas at Austin. He is a fellow of ISBA, IMS and ASA. He served as president of ISBA and chair of the Bayesian section of ASA. His research is focused on nonparametric Bayesian inference, with many applications in Bayesian biostatistics and bioinformatics, as well as innovative Bayesian clinical trial design. Recent research projects include inference on tumor heterogeneity, on inference for random graphs, random partition models and related inference problems in biostatistics. He published over 100 peer reviewed journal articles and wrote and edited several books on nonparametric Bayesian inference, Bayesian clinical trial design, and Bayesian biostatistics. He served on the scientific committees for many conferences, including many of the bi-annual workshops on nonparametric Bayesian inference, and did extensive editorial service.
∙Lancelot F. James(특별초청강연2)
Lancelot F. James is currently a Professor in the Business School at the Hong Kong University of Science and Technology. He has been at HKUST since 2001. Prior to that, he was an Assistant Professor in the School of Engineering at the Johns Hopkins University in Baltimore. He is well known for his work in Bayesian nonparametric statistics. Since the early 2000s, he has advocated and developed ideas related to the usage of Chinese restaurant processes, stick-breaking priors, and Pitman-Yor processes. Since that time, these colorfully named processes(the latter two named by James and his co-author Hemant Ishwaran in 2001) have played a major role in the development of intricate applications in Bayesian Statistical Machine Learning and Bayesian nonparametric methods in general, all of which are pertinent to the analysis of Big Data. Prof. James is an elected member of the International Statistical Institute. Since 2008 he is an elected Fellow of the Institute of Mathematical Statistics where he is cited for contributions to Bayesian nonparametric statistics, the development of Poisson partition calculus for Levy processes, and for dedicated service to IMS.
∙Patrick Groenen(학회장초청강연)
Patrick Groenen is professor in statistics and head of department at the Econometric Institute of the Erasmus University Rotterdam, the Netherlands. He is the current president of the International Association for Statistical Computing. Together with Ingwer Borg, he is a coauthor of a standard text book on multidimensional scaling with more than 1,700 cites on the Web of Science and and 4,500 on Google Scholar. His core research interests lies in computational exploratory methods in data science. He wrote articles on visualisation methods(multiple correspondence analysis, multidimensional scaling, biplots, biadditive models), optimization in statistics(MM algorithms, majorisation, constrained optimisation, least-squares, global optimisation, meta heuristics), unsupervised classification(clustering and fuzzy clustering), and applications in management, economics, biostatistics, genetics, and psychology. His current research interests includes supervised classification methods such as binary and multiclass support vector machines.
※Tutorial 강연 내용 소개
Bayesian statistics is an alternative approach to statistical inference, where Bayes rule is used to combine the prior probability of unknown model components before observing data with the likelihood of data in order to produce the corresponding posterior probability after observing data. Advanced computing power that did not exist even 20 or so years ago has continued to popularize Bayesian statistics in applied fields at an ever increasing rate. Indeed, it would not be possible to fit highly structured statistical models that are now prevalent in biological, physical, engineering, and social sciences without the recent advances in statistical computing. This tutorial will overview Bayesian statistics and introduce some useful computing methods such as Markov chain Monte Carlo methods that we frequently encounter in Bayesian statistics.
사 단
한 국 통 계 학 회 장
법 인